Vite: Bridging Every Blockchain in a Multi-Chain FutureIntroductionSolidity++ 0.8
Search

The design goal of Solidity++ 0.8 is to be compatible with the syntax of Solidity as much as possible, so that developers don’t have to learn different languages to implement the same thing.

We assume that you are already familiar with Solidity, if not, please read Solidity documentation (opens new window) before starting.

The Solidity++ 0.8 is still under development, you can try a nightly build version for development or test, but do NOT deploy contracts to the mainnet until a stable version is released. Please report an issue here (opens new window) if you find a bug.

Let us begin with a basic example that sets the value of a variable and exposes it for frontend to access.

As above, the way of declaring a contract is syntactically similar to Solidity.

The first line tells you that the source code is licensed under the GPL version 3.0.

The next line specifies that the source code is written for Solidity++ version 0.8.0, or a newer version of the language up to, but not including version 0.9.0. This is to ensure that the contract is not compilable with a new (breaking) compiler version, where it could behave differently. The only difference with Solidity is to replace solidity with soliditypp.

There are two interface functions in the SimpleStorage contract. The syntax of function declarations is the same as Solidity, but the semantics are different.

An interface function of a Vite contract is an async function.

An async function does not execute or return result in the request transaction but in a subsequent response transaction.

Unlike those Ethereum forks, Vite is a completely different blockchain with an asynchronous VM. All message calls on Vite are fully asynchronous.

An asynchronous call is not blocked when waiting for the called function to return. The caller cannot get the return data immediately after the call. Instead, it gets a promise of return types. (The promise syntax is not implemented in the current version.)

In 0.8.0, you can declare callback functions to pass return data back to the caller as follows:

After A and B are deployed, a client can invoke B.inc() function to increment A.data.

The execution is NOT in a single transaction, instead, there are multiple transactions initiated and propagated on Vite blockchain. 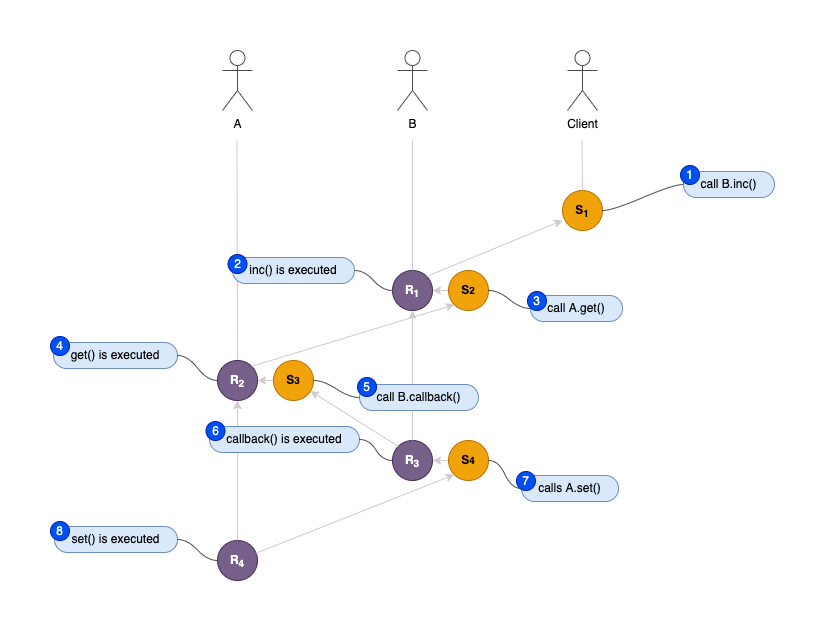 In 0.8.1, await operator is introduced. The await is used to wait for an asynchronous function to return.

The following code shows the usage of await:

It's not required to declare callbacks explicitly in 0.8.1, the solppc compiler will generate callbacks for each await expression under the hood. 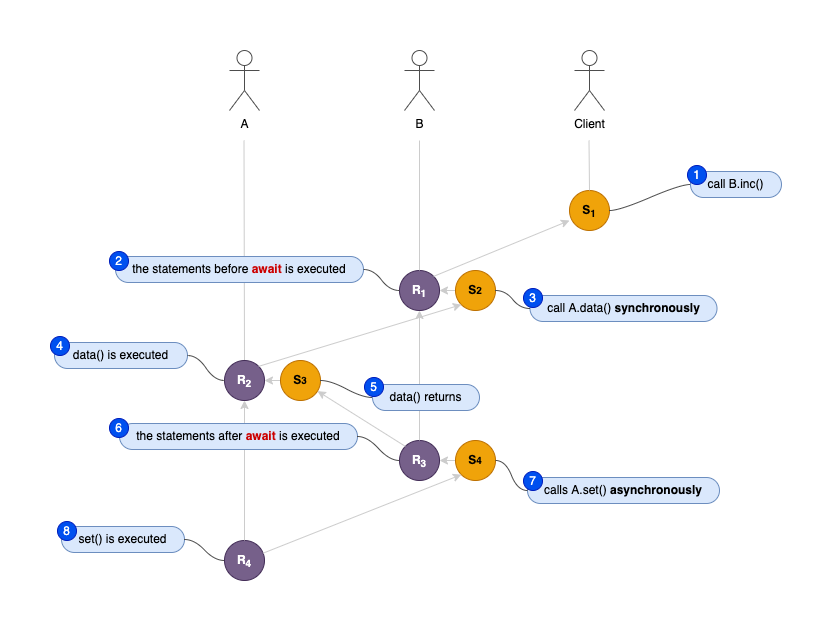 According to the above description, the code in 0.8.1 has a different syntax but the same semantics as the code in 0.8.0. The compiler and VM do a lot of mechanical work for the developer under the hood.

The await operator is only available after a Vite mainnet upgrade to enable the required instructions.

A function in Solidity++ not equivalents to a tranction on Vite, so functions are not guaranteed to have ACID semantics. The example above demonstrates a potential Isolation Failure issue which is known as Lost Update Problem. Consider the situation that B.inc() is invoked by two simultaneous requests, the corresponding responses both read A.data and then update it, the effects of the first update will be overwritten by the second update. In other words, after two function calls, A.data may have only increased by 1.

We welcome contributions from anyone interested, including reporting issues, fixing bus, commit new features and improving or translating the documentations.

Found an Issue?
Help us improve this page by suggesting edits on GitHub.
Previous
Introduction
Next
Contract Debugging